Overall we spent a month in Argentina and in true Trent and Jacqui style we covered significant ground on our favourite mode of transport: the bus. We spent a few days in tree filled Mendoza biking around the botanic gardens, sampling red wine in the famous Maipu valley and chasing criminals barefoot down the street. That is a blog post on it’s own. We had noticed that even though we were in what seemed to be a wealthy and flourishing country it was all a bit of a front for the gritty reality beneath the surface. We had discussed and learnt from many locals that as the economy drops the divide between the haves and the have nots was ever increasing, something we experienced first hand with our park robbery. Everything may be fixed at European prices but workers are still paid South American rate so how can they survive? Crime was skyrocketing as the division grew wider more people were forced to do what they had to, just to survive. We weren’t mad at the underweight teen that had stolen Trent’s phone but at the country that was leaving people like him behind. 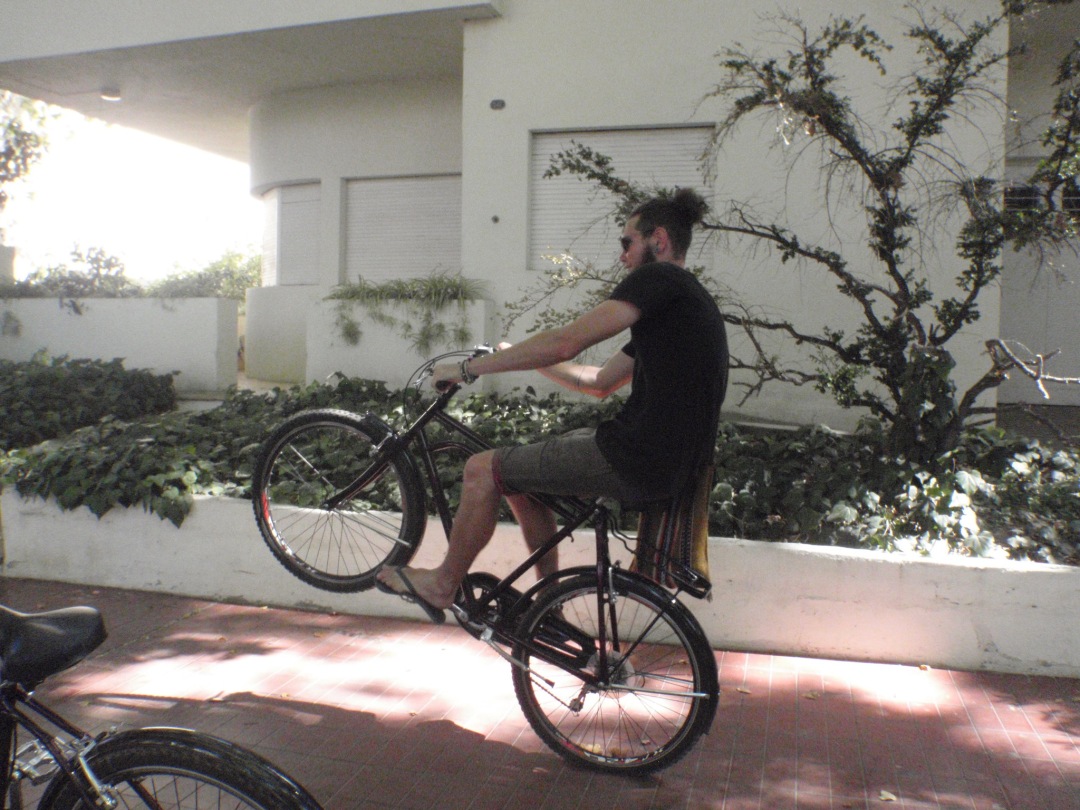 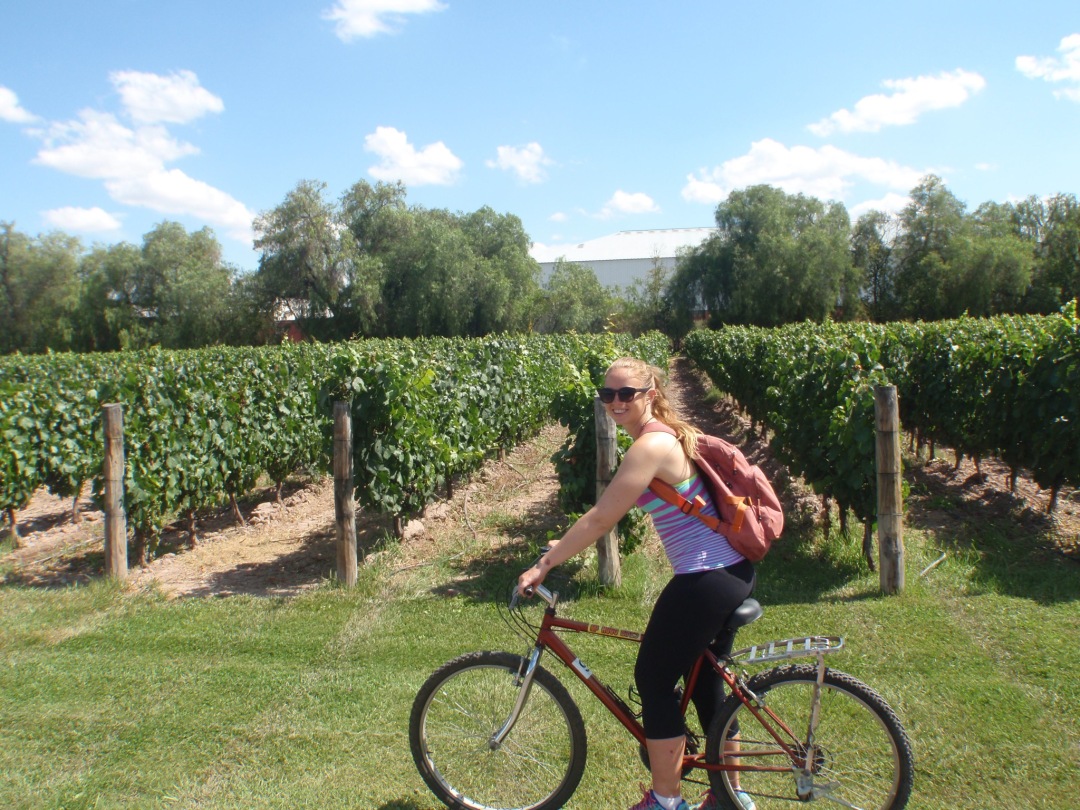 From Mendoza we headed 20 hours south to post card perfect Patagonian town of Bariloche. Beautifully located amongst crystal blue lakes, green mountains, alpine forests, wooden lodges and spas and wealthy holiday makers. It was here we spent a pretty uneventful New Years Eve, after being transported from our pre-booked ‘party’ hostel to a room in an industrial apartment complex we were quite isolated from the all of the ‘buzz’. Personally, the lack of fresh produce was playing havock on my digestive system and I fell asleep at 9pm whilst Trent drank red wine and watched The Rolling Stones in concert. Woo! We well and truly made up for it the next day as we bused out of town and cycled around the surrounding mountains. A challenging 30kms up and around the lakes was a perfect way to bring in the New Year and the alpine air was just the ticket. From Bariloche we were drawn to El Bolson, an apparent Mecca for hippies. Serves us right really , who would actually right that sentence down and put it in a guidebook (Lonely Planet of course). We were dreaming of farm stop cafes, camp fires and homemade jams but instead were greeted by busy streets and many tourists. A slight let down as we did spend a fare bit of cash (thank you MasterCard) to get there and had put all our hope on the idea of spending our time in Argentina working on an organic farm. Sadly after a few days of waiting, we had to move on as we couldn’t afford to bum around and stay in pricey dorm rooms and also feed ourselves at the same time. The surrounds were incredible however and not to be forgotten.

We next cut across the country on a 22 hours bus to Puerto Madryn in hope of spotting some Patagonian animals migrating from the South and stopping at Punto Valdes to breed. The tours to head out to the National Reserve on the coast were ridiculous, so along with two Israelis and a Frenchie we hired a Japanese car and headed out to see some Antarctic animals. Wow – wee how’s that for multi cultural? We spent hours driving along the coast and stopping to view colonies down below of Elephant Seals, Sea Lions and my personal highlight tiny men in tuxedos aka Magalanic Penguins. It was just coming out of breeding season and we were able to watch the Penguin babies make their way out of the burrowed nests for the first time. The little black and white fluff balls taking their first steps into the world was what dreams are made of. Can not describe how mesmerising it was to watch them waddle metres away. The rest of our car pool wondered how many photos Trent had to take of the Penguins and the answer was a whole lot. Could watch them for hours! 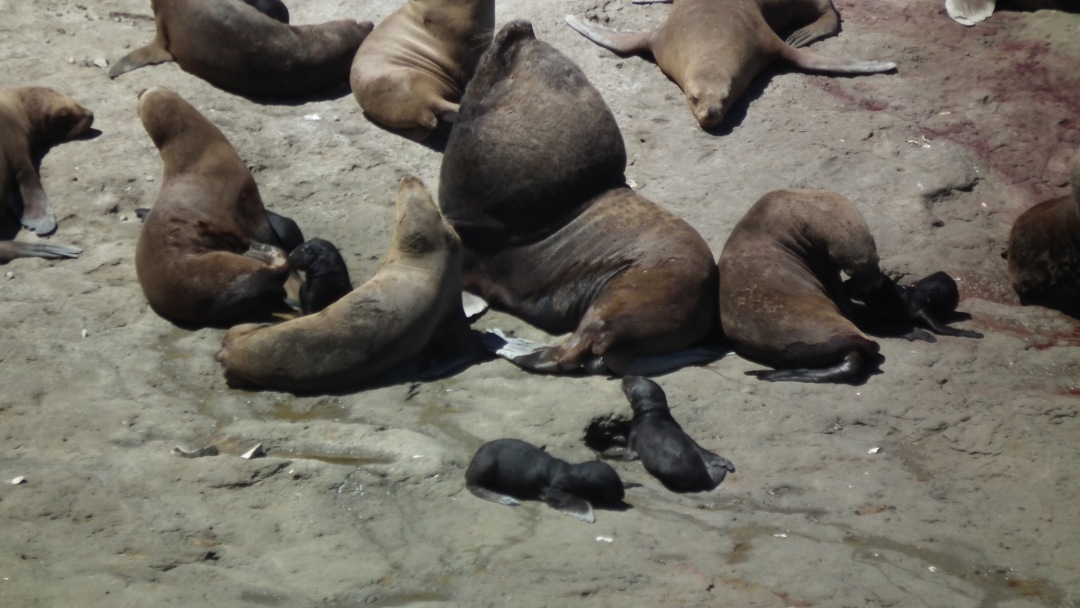 Another 24 hours bus ride and we arrive in the extravagant and elegant Buenos Aires. A mix of many different cultures with an undeniable French and Italian influence (classic port city) and we soaked in the beautiful architecture, myriad of art galleries and exhibits, artisenal markets, cemetery city and squeaky clean green spaces. We made the most of the cities bus system and was able to see a lot of the city – including the other side of the aristocracy. It was in BA that we truly couldn’t ignore the great divide between the rich and poor. The side of Ba not listed in the guide books. They do really love the Pope though. 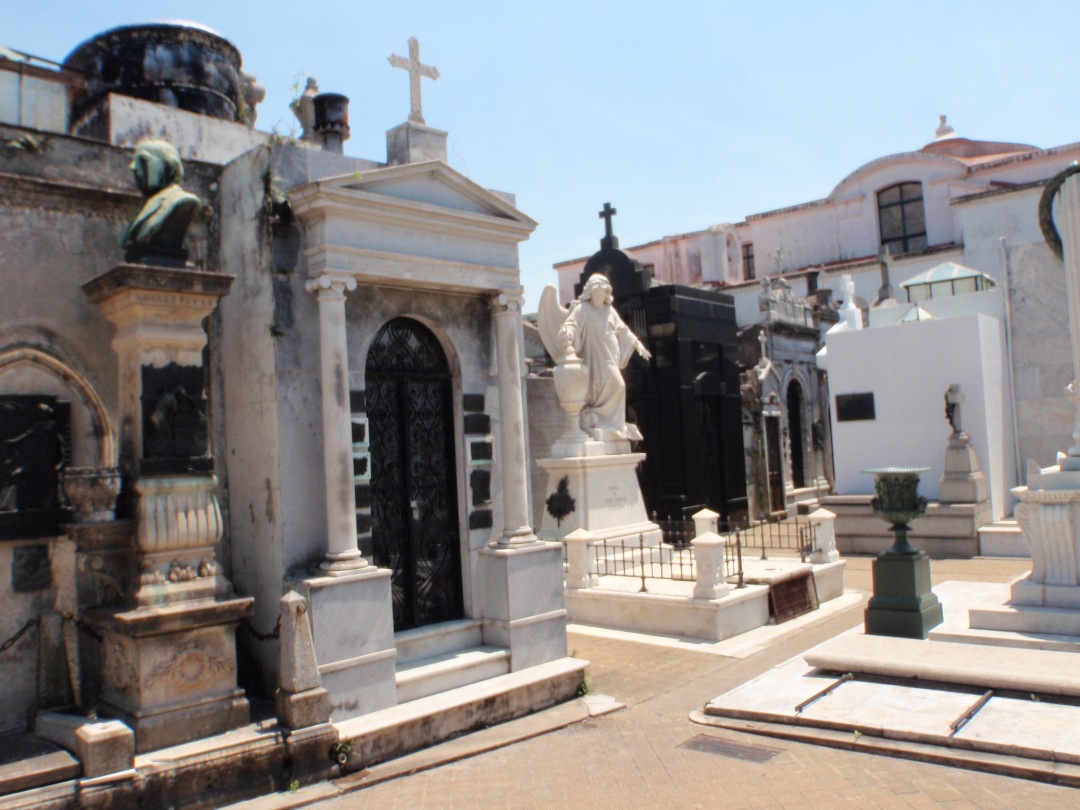 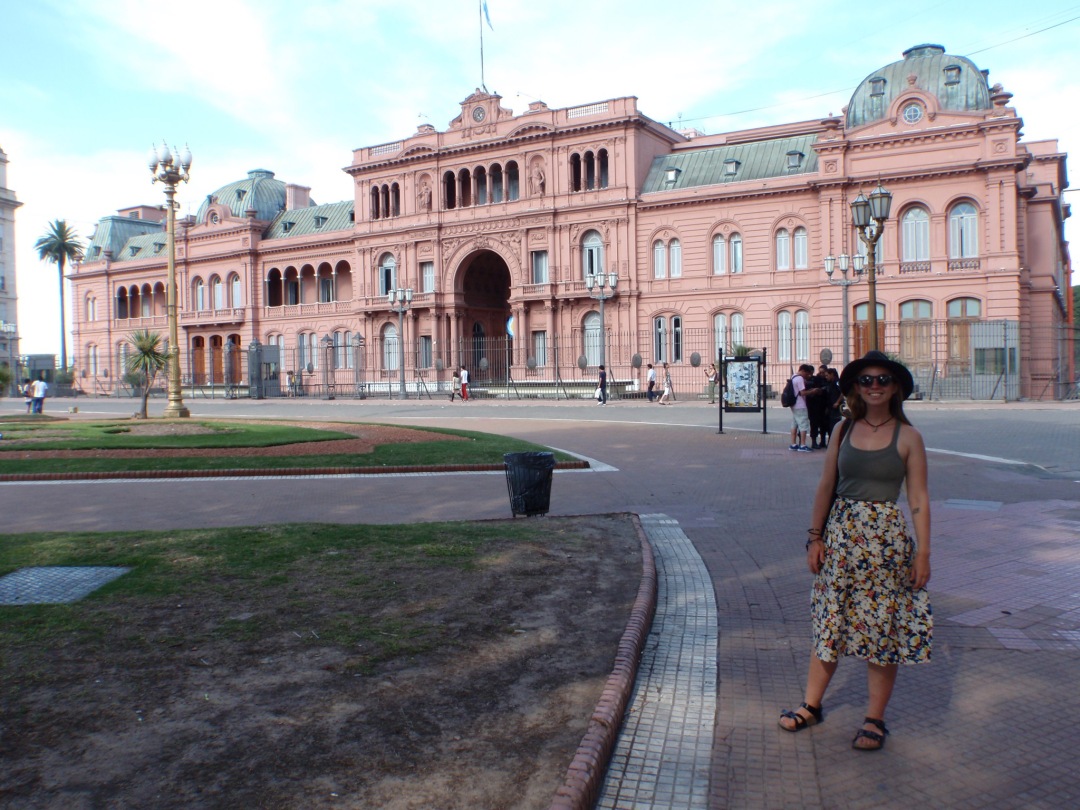 24 hours later on a $150 bus that flooded and soaked our backpacks (thanks Andesmar), we arrived in Puerto Igazu in 100% humidity and 40 degree heat. Minusing the heat, our rebooked hostel no longer being in operation, the blackouts and the Israeli backpacker (fresh from compulsory military service) takeover – this was to be our Argentinian highlight. Parque Nacional Iguazu was stunning and for the first time we could see where our park fee was going. An informative visitors centre, well detailed map, brand new signs, helpful and friendly Rangers and staff, well maintained paths not covered in rubbish. We could tell that the park was deeply respected. There was also a train running throughout the park for those too lazy to walk the few kms to the different spots as well as many other tourist opportunities like boat rides and jeep rides to take advantage of the surroundings. The heat that day was like a sauna which made the mist from the falls even more special to embrace as you got closer. You start to hear the roar from the falls from kilometres away and as you get closer something inside you starts to bubble up like a little kid waiting for Christmas Day. Seeing them, standing under them was pure magic. We spent the day walking the upper and lower trails, wandering off on different tracks, spotting wild coatis, monkeys and beautiful birds and soaking in the awe of the Worlds Biggest Waterfall. The highlight of the day was walking to the Devils Nose, the falls epicentre. You can only access this point by train and walking a series of rails that float over the river. Words can’t express the sheer size of the falls, the amount of water plummeting down and the reaction of your heart with the sound of the water. Just go see it. 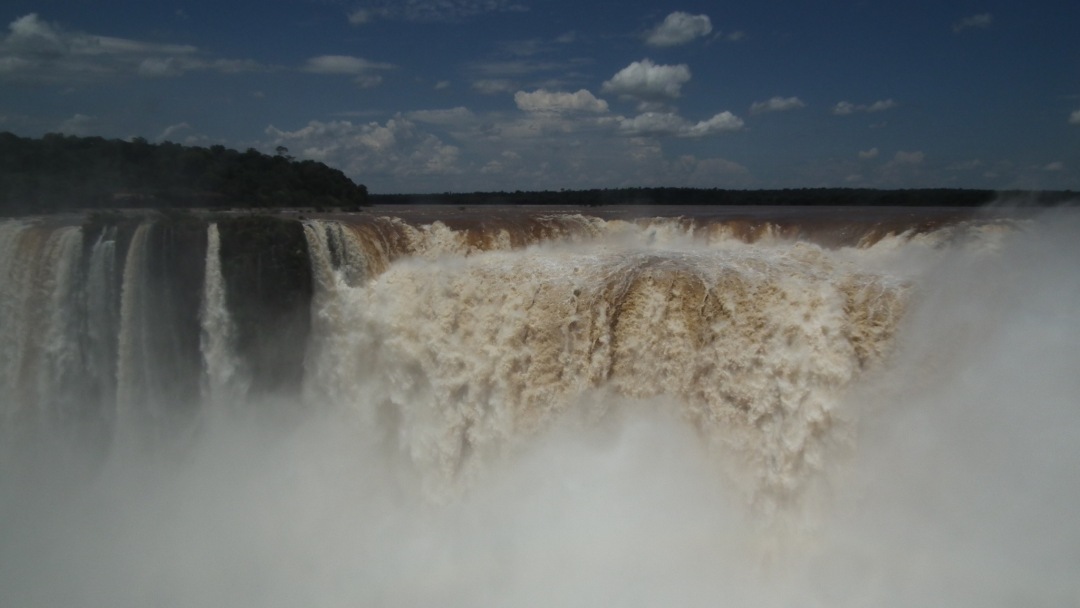 View all posts by jacdrisc

One thought on “Argentina: Patagonia, penguins and Puerto iguazu”